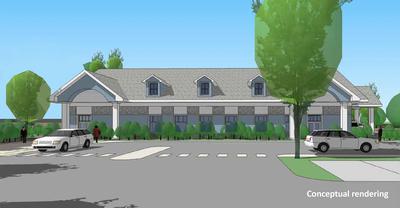 Digital drawing of what the new Blue Hill Hospital will look like. Northern Light hopes to begin construction in the spring of 2022.

Blue Hill—The old Blue Hill Memorial Hospital will be torn down and replaced with another about one-fifth the size of the existing building, Northern Light announced March 23.

The new facility will offer the same services as the existing hospital, and construction won’t disrupt those services, according to John Ronan, President of Northern Light Blue Hill and Maine Coast Hospitals. He expects the first shovel to go into the ground in spring 2022 and the building to be finished about 16 months later.

“I think we have a good, a really good sense of what this hospital needs to be,” Ronan said in a phone interview. “We’re building for the next 100 years. It’s something we’re really excited about.”

The project doesn’t have a price tag yet because plans haven’t been finalized, Ronan said. The 25-bed hospital will shrink to 10 beds, all in private rooms, Ronan said. No layoffs are planned as part of the project, he said.

The hospital will continue to offer such services as orthopedic and primary care, cardiac rehabilitation, imaging and a laboratory. It will have a new emergency room and still offer physical, occupational and speech therapy. The infusion clinic will continue for conditions such as rheumatoid arthritis, Crohn’s disease, anemia and multiple sclerosis, as well as blood transfusions and care for oncology patients. The Sussman Health Center will remain.

Ronan said the new facility will allow Northern Light to offer new services in Blue Hill through a “rotator clinic,” one in which different specialists come once or twice a week. Those specialties might include, for example, rheumatology or dermatology, he said.

The hospital, especially the 99-year-old main building, is outdated, Ronan said. “In-patient services are diminishing, the need for beds is diminishing,” he said.

The hospital will, however, keep its 25-bed license to allow for future expansion. That could happen if healthcare policy changes, if healthcare needs change or if the local population increases dramatically, he said.

The decision to replace rather than remodel came down to cost, Ronan said. It’s cheaper to tear it down, and the smaller new facility will also cost less to heat, cool and maintain, he said.

As far as financing, “We’ll put in some of our own money and we will be doing a capital campaign in the community,” Ronan said. No land sale is planned, he said.

Shawna Ambrose, Blue Hill town manager, said the plans still have to go through the planning board and the code enforcement officer.

“I certainly think there’s a need for health care in this area, especially in this day and age,” she said in a phone interview. But, she said, “A new hospital—who wouldn’t love a new hospital?”

Blue Hill Memorial Hospital was originally donated by Mrs. F.B. Richards in 1922 in honor of her daughter Katharine. Northern Light will acknowledge those who’ve been connected with the hospital in the past, said hospital spokesperson Kelley Columber in an email.

“The old hospital building has served generations of year-round and seasonal families for nearly a century, and it will continue to hold a special place in our hearts,” Columber said. “We will remember and honor the hospital and the caregivers who made a difference in countless lives over the years by creating a history wall in the new hospital.” Columber said more details will be shared as plans progress. 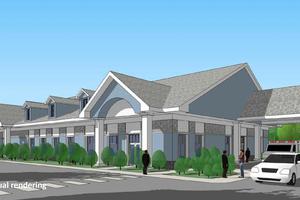 A digital drawing of rebuilt Blue Hill Hospital from another angle. It will be smaller and more modern than the existing facility. 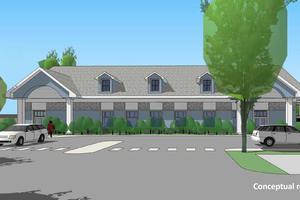 Digital drawing of what the new Blue Hill Hospital will look like. Northern Light hopes to begin construction in the spring of 2022. 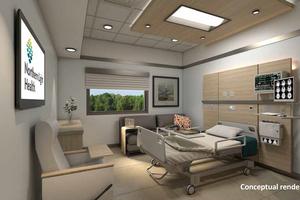 Conceptual design of a patient room at the rebuilt Blue Hill Hospital.