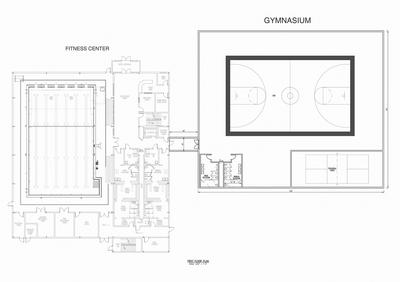 by Jeffrey B. Roth

Randy Bragg, an engineer with Carpenter Associates who worked with TradeWinds Marketplace owners Chuck and Belinda Lawrence in the design and construction of the $5.2 million fitness center that opened late last year, said the gymnasium is another phase of the project.

To prepare the site for the new $3.1 million gymnasium, the former daycare center, which originally served as the TradeWinds Marketplace garage and later as home to the Blue Hill YMCA branch, will be demolished, Chuck Lawrence said. Demolition and groundbreaking are scheduled to begin April 5.

“The gymnasium will be connected to the fitness center with a small connector,” Bragg said. “The first floor will house a regulation-size basketball court. Small tournaments can be held there. There’s other space on that first level for mechanical [and] electrical, [with space] for some other events, off to the side. The basketball court is proposed to have three pickleball courts painted onto the court.”

The second level, which can be accessed from the second floor of the fitness center, will feature a small welcome area and “have a perimeter track around it for either slow joggers, like me, or walkers….One side will be a little wider so you could have some bleachers there to watch a basketball game or any other event…whatever is going on below,” Bragg said.

While no additional showers and locker rooms are planned for the gymnasium, the second story will feature restrooms. The fitness center, Bragg explained, has restrooms on the first floor and second floors. Downeast Family YMCA members using the gymnasium will use the showers and locker rooms located in the existing fitness center, Bragg added. Additional parking space is also being planned.

“This is pretty straightforward,” Bragg said. “There’s not a lot to it. It’s a big open space for the gymnasium. Most of the stormwater drainage was already in place in anticipation of this project.”

During the public comment portion of the meeting, Blue Hill resident Marcia McKeague said, “I just wanted to speak in favor of this. I think it’s great. I know quite a few people who will enjoy the pickleball aspect of this new gymnasium. Thank you very much to the Lawrences.”

Lawrence hinted at having “some nice things up our sleeve, you know, maybe a golf simulator for those cold winters when someone wants to improve their games.” He added that there is about 2,000 square feet of space available that has not yet been designated for any specific purpose.

Planning board chair Mary Alice Hurvitt said the entire planning board was grateful for the generosity and thoughtful way the Lawrences have approached the project and how engaged they are in the process.